Details
In Newsroom
/ Published on 18 November 2015

Today’s dedication of a new ‘flying intensive care unit’ by the Royal Flying Doctor Service (RFDS) marks the start of a five-year wave of investment by the RFDS in the communities of South and Central Australia.

VH-FXJ features state-of-the art avionics and emergency services communications technology, and will replace an aeromedical aircraft which has served the SA community for the past 13 years and transferred more than 10,000 patients.

“Like its predecessor – and the other aeromedical aircraft in our fleet – VH-FXJ will assist two South Australians every day for the next decade, and I can’t think of a better return on investment,” David Hills Chairman of RFDS Central Operations, said at the official dedication ceremony of the VH-FXJ.

“The purchase of this ‘next generation’ aircraft has been made possible due to a capital grant from the Commonwealth Government, together with the support of our corporate sponsors and donations we receive from members of the community. We acknowledge their generosity, commitment and support of the Flying Doctor,” Mr Hills said.

“Today we make special mention of major benefactor Simon Hackett, who has granted $600,000 from the Hackett Foundation to fund the medical fit-out that converted this aircraft into a flying intensive care unit,” he said.

Federal Treasurer Scott Morrison was delighted to announce the $2.7 million contribution by the Commonwealth towards this landmark capital initiative.

“The RFDS is a tremendous Australian institution that has been offering critical medical services to rural and remote communities since 1928. It is a fantastic honour to dedicate this new aircraft which will enable the RFDS to continue their fine tradition of service,” Treasurer Morrison said.

“The Federal Government is proud to have committed $20 million in additional funding through the 2015 Budget to support the work of the RFDS, building on a $6 million commitment in the 2014 Budget,” he said. 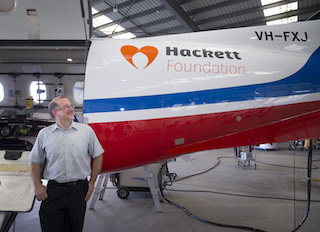 Simon Hackett, Hackett Foundation, said it was a privilege to assist the Royal Flying Doctor Service to fulfil its mission.

“In a vast nation like Australia, prompt medical assistance is literally a matter of life and death,” Mr Hackett said.

“The RFDS plays a vital role in saving the lives of people living in remote and regional Australia, so the Hackett Foundation is honoured to assist the RFDS by funding the medical fit-out of VH-FXJ. I’m sure it will do us proud,” Mr Hackett said.

John Lynch, CEO of RFDS Central Operations, said the investment in VH-FXJ was among several major capital projects currently being undertaken by the RFDS, including the construction of a new RFDS Aeromedical Base at Adelaide Airport.

“The Board of RFDS Central Operations has earmarked $82 million for its capital expenditure program over the next five years for the replacement of aeromedical aircraft, medical equipment and upgrades to operational facilities,” Mr Lynch said.

“These major projects are critical to the RFDS maintaining its proven track record of innovation, outstanding patient care and the highest safety standards to benefit our staff, health delivery partners and the community we serve,” Mr Lynch said.

“The on-going support from the entire community – our government partners, public donors, corporate sponsors and volunteers – will be critical to us meeting our future financial challenges.”

VH-FXJ is one of 11 medically-equipped Pilatus PC-12 aircraft owned and operated by RFDS Central Operations across its Adelaide, Port Augusta and Alice Springs Bases.

“In 2014/15, more than 8000 patients were transported by RFDS aircraft in South and Central Australia alone,” Mr Lynch said.

Mr Lynch said demand for RFDS’ aeromedical services was not only for ‘traditional’ emergency evacuations from rural and remote areas, but also reflected the growth in the number of patients being transferred between regional and metropolitan hospitals to enable specialist treatment or life-saving surgery.

Over the years to come, VH-FXJ will continue to assist members of the community, delivering services ranging from the: