Internode founder and technology investor Simon Hackett has made a major investment in AvPlan, an Australian company that develops iPad-based flight planning software for professional pilots.

Founded in 2011 by Melbourne-based pilot and software developer Bevan Anderson, AvPlan is an iPad and iPhone-based app that dramatically simplifies the process of developing and filing aircraft flight plans. Thousands of pilots throughout Australia and the United States already use AvPlan.

Mr. Hackett has invested in a 40 per cent stake in AvPlan, allowing the company to diversify the product portfolio and accelerate a US expansion.

Mr. Hackett, who is also a pilot, was AvPlan was the perfect investment. “It’s in a realm I understand and makes sense to me,” he said.

“When I first discovered this software, I had no idea you could do this on an iPhone or iPad. I flipped overnight to using AvPlan after having previously used an old Windows program. To paraphrase Victor Kiam, who bought Remington in 1979, I liked this software so much, I bought into the company.”

Simon Hackett, who sold Internode to iiNet Ltd in 2012 and became a major shareholder of the ASX-listed company, has since diversified his portfolio by investing in a number of innovative Australian companies including visual effects specialist Rising Sun Pictures (http://www.rsp.com.au) and geolocation start-up Geepers (http://www.geepers.com/).

Australia’s aviation industry watchdog CASA (the Civil Aviation Safety Authority) has recently certified AvPlan as a permitted “Electronic Flight Bag” (EFB) application that can be used in flight instead of paper-based aviation maps and charts. 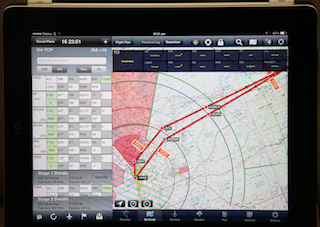 AvPlan’s licensing permits a single subscriber to use the software on three devices – allowing a pilot to carry a primary iPad, a backup iPad and to have a second backup literally ‘in their pocket’ because AvPlan can run happily on an iPhone.

The software allows a pilot to file their flight plan electronically with AirServices directly from within the app. It will then construct a PDF document package containing all of the relevant flight documents needed for that flight, including flight plan, flight plan confirmation from AirServices, Weight and Balance, fuel calculations, weather forecasts and all relevant airport charts for the planned route flown.

A particularly useful feature for Instrument Flight Rules (IFR) pilots is the advanced capability to automatically calculate optimal IFR routes for the planned flight. The pilot can choose the route that best meets their needs and then simply use ‘drag and drop’ to modify that route directly on the map.

Mr. Hackett said AvPlan was the perfect tool for professional pilots and for recreational pilots. “It really shows its unique capabilities in the hands of pilots flying under IFR in high performance aircraft,” he said.

“AvPlan can take you from an intention to a filed IFR flight plan in just a few minutes. Today, tablets are such sophisticated computers that AvPlan is all you need to plan your flight and then fly your plan.

“AvPlan’s moving map capabilities, including the integration of all relevant IFR and VFR (Visual Flight Rules) charts into a single ‘mega chart’ for each flying mode, gives you capabilities that exceed those available on the Multi-Function Device in an advanced aircraft cockpit.

“You can superimpose weather data from the Bureau of Meteorology, including Radar and SIGMET areas and pop-up airport weather forecasts. You can even superimpose your geo-referenced instrument approach plate right onto the moving map.

“For pilots of high performance aircraft who benefit from choosing the best flight level to suit current wind conditions, AvPlan will save you more in fuel each time you fly than its entire annual subscription.”

Bevan Anderson said Simon Hackett’s investment would accelerate AvPlan’s rollout. “We’ve spent the past two years making sure that AvPlan is a function-rich and rock solid product,” he said.

“Now, we can accelerate the development of AvPlan, and we can formally launch it in the US, where there’s a huge market for this sort of easy-to-use, convenient and affordable product.”

The AvPlan software is free to download, which includes an automatic 30-day trial data access period. Ongoing use is based on subscribing annually for required chart and map data. Pilots can subscribe to their choice of VFR charts, IFR charts and IFR instrument departure and approach plates. Whereas a full set of national paper charts costs about $400-$500 a year to obtain and update, an AvPlan subscription starts from just $75 a year.

AvPlan is an iOS app developed by AvSoft Australia Pty Ltd, an Australian company that designs and delivers mobile applications by pilots for pilots. AvSoft’s flagship product, AvPlan, simplifies the aviation experience by creating an Air Traffic Control-compliant Electronic Flight Plan on your tablet device in just minutes, eliminating the time-consuming complexity and cost of developing flight plans based on paper maps and tables. Designed to meet the high standards of professional pilots, AvPlan is affordable for and easily used by any pilot, whether they’re in the cockpit of a 747 or a Cessna.