Details
In Innovation
/ Published on 17 January 2014 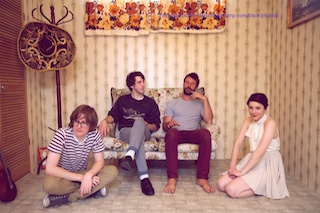 The songs are the result of a year of musical collaboration within the band, and a commitment to perfecting live performance.

The EP was recorded at SAE in Adelaide with the help of Michael Carver and mixedby the band in their home studio (...Alister's bedroom). 'Round These Parts was launched on December 13th at 'The Crown & Anchor' hotel music venue.

Says one local commentator: 'Adelaide band, Alphabette, have been playing and evolving together since mid 2012. Rich with sugary vocals, irresistible rhythms, sprinkles of guitar and dripping in the gooey sweetness of '60s pop, Alphabette will make you dance; without spilling your tea.'

ALPHABETTE: Your spell-checker will continually reject this name – but remember it, for all the best musical reasons… (but please do not pronounce that final ‘e’) !

The EP recording available for purchase online at: