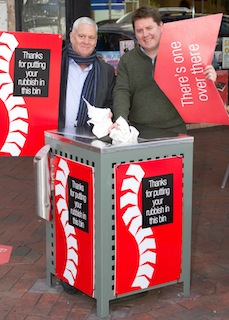 Late night littering in Adelaide’s entertainment precincts is being tackled from the ‘footpath up’ in a campaign launched this week on the city’s sidewalks.

Supported by KESAB, Adelaide City Council is embarking on an Australian-first anti-litter message to urge late night revelers to dispose of litter responsibly around Hindley Street and Gouger Street.

Starting this week a total of 45 bins around high pedestrian night traffic zones like Hindley and Gouger streets will be wrapped with bright red panels on all 4 sides with positive and enticing messages pasted on the surrounding footpath.

Research carried out for KESAB came back with the “usual excuses” from litterers as they wandered around city nightspots. The findings by research company Square Holes included:

“We are proud to be partnering with KESAB to tackle litter in our busiest night spots and encourage city goers to do the right thing when it comes to putting rubbish in the bin.

“This simple and innovative campaign fits precisely with Council and KESAB’s stated objective of encouraging use of litter bins and it is a low cost option that suits Council well.

“Putting rubbish in the bin should be a simple, automatic action that everyone should follow and goes a long way in keeping our streets clean and protecting the environment.”

KESAB Chief Executive John Phillips said littering offenders often claim they didn’t see a bin. “We are dealing with ademographic who are largely unmotivated to dispose of litter properly, a group who are hard to connect with through usual forms of advertising, so we needed to consider unconventional options,” Mr Phillips said.

“The reality is that most Council litter bins are indeed painted a nice dark environmental green – acceptable for daytime use but hard to see at night in entertainment areas.

“The option was to change the colour of the bins and come up with something quirky and challenging to make sure night visitors to the city actually see the litter bin and get a message on the spot to do the right thing,” said John Phillips.

KESAB will monitor the campaign and compare the impact with bins used in other streets.

For media enquiries for Lord Mayor Stephen Yarwood contact Naomi Marsh on n.marsh@adelaidecitycouncil.com or 8203 7446 or 0448 665 434