Details
In Innovation
/ Published on 01 March 2010 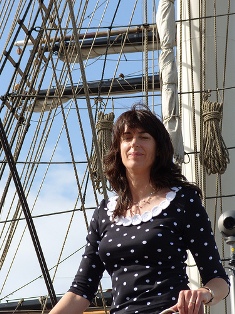 A 76-metre clipper that is re-enacting the Beagle voyage of world-shaking scientist Charles Darwin, author of evolutionary handbook Origin of the Species, berths in Adelaide tomorrow.

The Clipper Stad Amsterdam follows in the footsteps of Charles Darwin

150 years after the publication of Darwin's book "On the Origin of Species" the Clipper Stad Amsterdam, by request of the Dutch Broadcaster VPRO, sails around the world following the route of the Beagle. Stad Amsterdam will be visiting four Australian ports – Sydney, Melbourne, Adelaide and Perth - for VPRO’s Beagle re-enactment voyage. A Dutch film crew, guests and scientists will be on board. The media are invited on board the ship at Williamstown Workshops Pier in Melbourne, on Tuesday 23rd February from 12pm - 2pm.

Sarah Darwin is assessing the future of species

Charles Darwin’s observations during his journey around the world, which he made on board the HMS Beagle 178 years ago, later led to his publication of ‘On the Origin of Species’. His theory of evolution drastically changed the former visions of mankind, and he can therefore be called one of the most influential persons in history. The international scientific Beagle Project is now re- sailing this famous voyage, this time attempting to determine the future of species, which can be considered an important contemporary concern. One of our most prominent guests on board, Sarah Darwin, Charles Darwin’s great- great- granddaughter and biologist, is hereby following her forefather’s footsteps. Created in the Darwin year, the 35-part TV documentary “Beagle, On the Future of Species” marks Charles Darwin’ 200th birth year and the 150th anniversary of his publication ‘On the Origin of Species’.

The three-masted ‘Clipper Stad Amsterdam’ (76 meters long), has been carrying an international crew of scientists, philosophers, historians, artists and biographers on a voyage around the world since September 2009. This exciting expedition has already sailed to Great Britain, Spain, Brazil, Uruguay, Argentina, Chile, Peru, Ecuador and Tahiti. Next ports will be Australia (Sydney, Melbourne, Adelaide and Perth), Mauritius and South Africa. The voyage will be completed by the end of April 2010 having roughly covered 24,000 nautical miles. Along the way, our hosts were joined by guests like Christopher Lloyd, James Moore, and Randal Keynes* and other internationally acclaimed scientists from a range of disciplines. They have been and will be on board to carry out various types of research along the voyage. Fossil hunters, DNA researchers, geologists, oceanographers and other scientists within various fields of expertise will conduct in-depth research to evaluate the earth’s current condition.

Ongoing research on board the Clipper Stad Amsterdam

The historical Stad Amsterdam, was originally built in 2000 with the initiative of global recruitment & HR services company Randstad and the City of Amsterdam, providing work experience and training to a diverse group of 138 unemployed people. Like her there is only one more in the world called Cisne Branco, which is used for training by the Brazilian Navy. However, the Stad Amsterdam has been modified to fit the needs of a sailing TV studio with two complete TV studios, satellite dishes and webcams. These were installed to ensure 24x7 contact with the public. Along the entire voyage and among others, we will research the smelling ability of humans on five different continents and will gather plankton with the CPR (Continuous Plankton Recorder, provided by the British SAHFOS Institute) and with a plankton indicator. We will also launch an Argo float in every ocean we visit (part of an international project, called Argo). The Argo is used to measure the quality of the ocean’s salt and its temperature. The most recentresearch introduced on board was about the ocean-skater “Halobates”, the unique insect known with representatives living in the open sea. This research has been conducted by Lanna Cheng, researcher from the Scripps Institute of Oceanography in San Diego, CA.

Sarah Darwin is Charles Darwin’s great-great-granddaughter and biologist. She is following in her forefather’s footsteps and will fulfil the historical part of the project, as she is continuously connected to Charles Darwin’s discoveries and tries to unite those to what she finds herself, this present day.

Redmond O’ Hanlon is a British author of travel books and a Naturalist. He is no stranger to extreme natural landscapes and very font of travelling and books. He will stay on board the entire voyage.

Dirk Draulans is a Flemish/French speaker Biologist, specializing in Zoology and he’s a Flemish Television presenter. He has written several books on the theory of evolution; the most recent being ‘The Success of Bad Sex’, in which he explores in what ways Darwinist evolution exerts influence on humans. His main focus is to make science accessible for a broad audience, and he attempts to always intertwine the theory of evolution with everyday occurrences. Anthony Smith is the youngest Beagle guest on the ship, also known as ‘the Clipper’s Artist’. He will also remain on board during the entire voyage. His passions involve both science and art, and he received his first commission when he was just eighteen years old.

The Beagle project is creating as she sails, a 35-part television series, broadcast by the Dutch and Flemish Public Broadcasting Channels. But it is not just a television series alone. It aims to be one of the most comprehensive cross media projects ever performed using the latest multimedia technologies available. The discoveries and life on board can be followed live via webcams, weblogs, widgets, videos, photos, mobile, Twitter and other social networks, to name just a few of the exposure platforms. This project is an interactive experience for an international community, visible 24 hours a day, 7 days a week, which will last for almost one year.

‘Beagle, on the future of species’ in Melbourne

The Clipper, carrying her 25-person crew, the TV crew and guests left Sydney on February 17th and is now heading to Melbourne. The Clipper is due to arrive at Williamstown Workshop Pier on  February 23rd at 11 am. In Melbourne , the crew will shoot part of episodes “The Empty Continent”, which focuses on climate change, “Artificial Evolution” and “Dutch Traces”. “Artificial Evolution” speaks for itself but “Dutch Traces” goes all about possible traces of Dutch influence in the aboriginal culture. Tim Flannery, Copenhagen Climate Conference’s chairman, Daniel Dennett, author of Breaking the Spell, Freedom Evolves and Darwin’ss Dangerous Idea, Marc Hauser, evolution psychologist and biologist, and Jan Berent Stuut, desert dust researcher of the Royal Netherlands Sea Research Institute (NIOZ) are the main guests in these episodes. The expedition will depart for the next destination, Adelaide, at 9am on Friday 26thth February.

From about 12pm until 2pm (after the ship has cleared customs), the press are welcome on board Williamstown, Workshop Pier to take pictures, to interview the guests and to be taken on a tour of Stad Amsterdam. Only press members who have RSVPed with Cleo Ferreira and who hold a photo ID are allowed on board. Full names and ID numbers must be communicated in advance via email to c.ferreira@vpro.nl. Note that the dates and times may be subject to change.

It’s possible to interview the guests who are on board right now - Redmond O’Hanlon and the captain Richard Slootweg. Interviews with Sarah Darwin can be done via telephone. Please, contact Cleo Ferreira to have this organized (see note to the editor).

Due to a very busy schedule, unfortunately Stad Amsterdam will not be open for public visits. But local Tall Ships One & All, Enterprize and Young Endeavour will be going out to meet and to escort her coming into Williamstown. Australian arrival and departure information is as follows:

Christopher Lloyd: Historian and author of “What on earth happened?

James Moore: Science Historian. Grew up in a strict religious environment in Chicago, immigrated to England and there threw himself into Darwinism.

Randal Keynes: Author, including the book “Darwin's Daughter”. Keynes is also a Darwin descendant. Hans Fels: Beagle project creator and initiator, as well as TV director in the program.