Details
In Innovation
/ Published on 04 April 2011 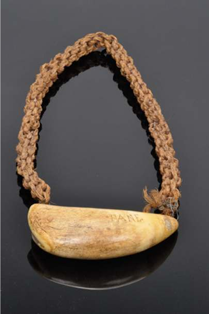 Adelaide antique dealer Peter Jenkinson has located a rare whale’s tooth – a sacred artifact known as a tabua - from Fiji.

Last year, Mr. Jenkinson bought the whale’s tooth from the son of an Australian Methodist minister, the Reverend Charles Dadds, who had received it as a gift from indigenous Fijians when he was a missionary from 1918-1920.

Mr. Jenkinson said the tabua was intricately interwoven in traditional Fijian cultural life. “Its relationship with the sacred is the key to its understanding,” he said.

“James Cook introduced the word “tabu” to the English language after visiting Tonga in 1777. The anglicized form, taboo, denoted a sacred Polynesian system of beliefs that had restrictions and prohibitions. The barrier between the everyday world and the divine is the tabu, and it sets apart the sacred.

“In Fijian, tabu becomes tambu, which means sacred or holy. Used in the form tabua, referring to whale’s teeth, it means the most sacred or holy symbol. The power of the symbol is that it exists at the root of human thought and thereby acts to open and transform the mind.”

Mr. Jenkinson said the tooth was believed to come from a sperm whale, the world’s largest predator, as long as 18 metres and weighing up to 42 tonnes. “Despite their huge ships and maritime prowess, Fijians did not hunt the whale, they clearly revered it,” he said.

“The whale tooth was sacred, in part, because it came from the oldest, largest and most mysterious beast in the Fijian’s realm. It was a talisman from the most powerful creature on the planet.”

Mr. Jenkinson is offering the tabua for private sale. For more information about the tabua, contact Peter Jenkinson at pjenkinson@internode.on.net.