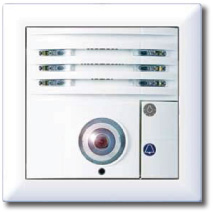 Impress Media has installed an IP-enabled video door camera at its Norwood premises that lets you see and talk with visitors to the office – even if you’re not there!

Ideal for those times when you’re running late, the Mobotix door camera contains a built-in microphone that allows real-time two communications with anyone who rings the door.

Supplied by Vision Security Services, the Mobotix IP door camera can communicate with an iPhone, iPad or Android phone via the QCam Pro smartphone app.

As well as allowing two-way conversations, QCam Pro proactively issues alerts on the smartphone screens whenever the Mobotix door bell is pushed.

Impress Media managing director John Harris said the new camera had improved security. ”As well as letting us know who’s at the door, the camera actually senses and records any movement even, effectively monitoring the main door to the office at any hour,” he said.