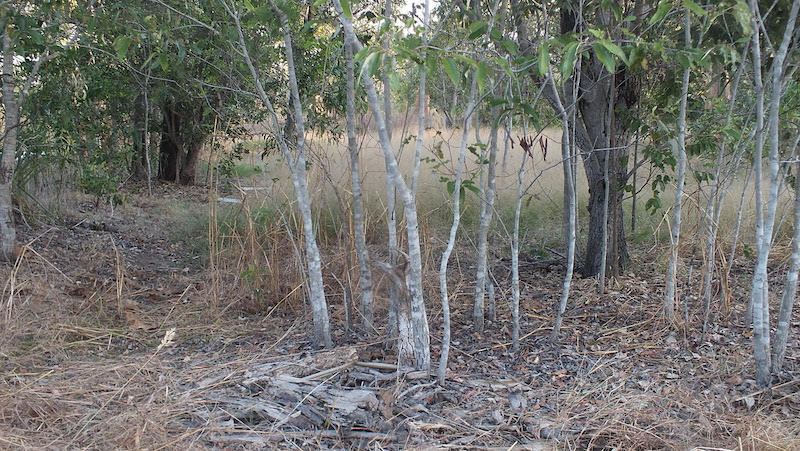 Also, because of its high water uptake – three times as much as native grasses - gamba grass can reduce both groundwater and streamflow (Rossiter et al., 2003).  Given a series of poor Wet seasons along with greater than average evaporation because of increasing maximum temperatures, communities and landholders risk running out of water.

Furthermore, it poses an opportunity for arsonists because of low population density in rural areas and therefore lack of surveillance.

For decades a glyphosate-based herbicide such as Roundup has been used to kill gamba grass.  But many people don’t want to use glyphosate and for a variety of reasons.   For example, they worry about the reported adverse health and environmental effects (van Bruggen et al., 2018). And protective gear is uncomfortable to wear in the Top End humidity. 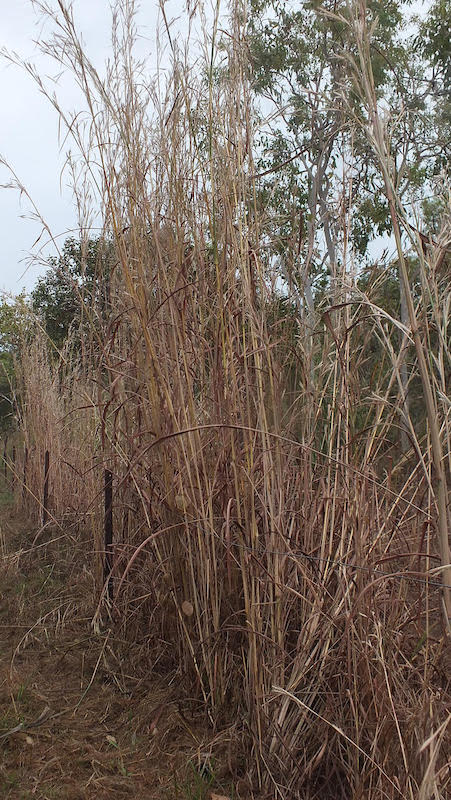 Gamba grass killed with glyphosateAnother concern is the potential for the weed to become resistant.  Resistance is when a weed survives a normal herbicide treatment.  The whole plant needs to be sprayed at least twice, and as we’ve witnessed on other properties, this does not always happen.

In 2012 during an interview of weed resistance Professor Stephen Powles of the University of WA stated that ‘something like glyphosate is as precious to Australian and global food production as penicillin is to human health’.   But because of herbicide resistance, according to Professor Powles, we shouldn’t be sticking to it.  According to Professor Jason Norsworthy, University of Arkansas, growers there have no choice but to handweed (Clark, Landline, March, 2013,

But killing gamba with glyphosate also leaves it standing and ready to feed fire into the tree canopy.  (1. PHOTO OF DEAD GAMBA GRASS).

Some people just pull gamba grass up, but given the size of the weed this can be quite difficult particularly for small people like myself.   Furthermore, it leaves a hole in the ground that should be filled and covered to prevent erosion.

So, for all the above reasons I began experimenting, some years ago, with different ways of getting rid of gamba that didn’t involve glyphosate or pulling the stuff out.  But the most important thing was to remove tit from the tree canopy and so my first move was to push the plant over and stamp on the base so it stayed flat.

As a child I’d heard that vinegar killed weeds.  But while it did away with small gamba plants it did not affect the large tussocks.  That was until I flattened them, and crushed the lower stems. I then just poured vinegar on the base.  The clumps, no matter their size, died, sometimes within hours (the biggest weeds took two days).  (2. PHOTO OF GAMBA GRASS FLATTENED AND POISONED WITH VINEGAR).

Because the vinegar was only applied to the base there was no spray drift.  Neither did I have to wear protective gear.  In fact, the vinegar- – Coles Home Brand containing 4% acetic acid – is so safe a child could use it.  Because vinegar can corrode rubber and metal, I apply it with a suitable chemical sprayer or a plastic watering can.

But vinegar is not the only safe way of controlling gamba.  The weed does not grow under certain native trees for example, some acacias (eg A. auriculiformis, holosericea and mangium) and also red ash (Alphitonia excelsa).  (PHOTO 3.  BARE GROUND UNDER A. EXCELSA). The saponins, soap-like substances, in the leaves of these trees, are known to suppress the growth of other plants (Hoagland, Zablotowicz & Reddy, 1996).   I also slash pure stands and lay down old corrugated iron which is removed a couple of months later.  The gamba does not regrow.

Changing attitudes to gamba is difficult given the past ambivalence of governments (Neale, 2019) and support from the cattle industry.  Yet, given the amount of glyphosate in use resistance must have already appeared somewhere.  So, what happens when as occurred with other weeds, it stops working?  Or when as has almost occurred on several occasions people die.  There is no plan B.