World-famous birdwatcher, Bo Beolens, aka the Fat Birder, will call for more accessible nature reserves when he presents via podcast at a Darwin workshop that aims to improve wildlife tourism in the NT. The British birder is renowned for championing the...

When I first received the invitation to speak at the Bird Festival, I thought it was to be held in Columbia, USA.  After all, who in their right mind would run such an event in Colombia, South America?

North Americans participating in my PhD research on birdwatchers who travelled internationally, had elected Colombia as the country most would not visit, several citing friends who had been kidnapped by the FARC, a Colombian Marxist–Leninist revolutionary guerrilla organization.

And then there were the drugs: everybody I knew had heard of the efforts to rid the country of coca plantations.

But the invitation from Sergio Ocampo Tobon, President of the Colombia Birding Network, certainly was for the South American country: indeed their Government was offering me an all-expenses-paid trip to speak at the third Colombian Bird Festival to be held in Manizales.

I googled the name to find a beautiful city perched on a ridge in the mountains, a city with no sign of ongoing revolution, but instead twelve universities!

Still I went, heart in mouth, and not only because of the FARC, for very few reviews said anything nice about Aerolineas Argentinas with whom I was to fly – the plane was dirty, seats were broken, the food was terrible and the staff were disinterested.

But my trepidation was without foundation  - every plane and the one bus I travelled on, was spotless, nothing was broken, and the food and service were nearly equal to that of Qantas.

Still in many ways it was a tough trip - the missing data on the e-ticket, confusing or absent information that nearly resulted in missed flights, the long hours stuck in that tiny space called an airline seat (tough for one who has the freedom of 20 acres at home!), two scary landings, and a bus trip through the mountains that I only just survived with stomach contents still in situ.  But in other ways it was easier than most other international trips I’d taken.

World-famous birdwatcher, Bo Beolens, aka the Fat Birder, will call for more accessible nature reserves when he presents via podcast at a Darwin workshop that aims to improve wildlife tourism in the NT.

The British birder is renowned for championing the challenges faced by disabled birdwatchers and others who try to find a suitable birding tour or access a nature reserve.

Mr. Beolens, who suffers from Ankylosing Spondylitis, a crippling arthritis of the spine, said nature reserves and birding trips offered few concessions to the average person, let alone those with restrictions on their mobility. “It occurred to me this is because the majority of (those in the business) are six-feet tall, fit and able young men,” he said.

“I always liken such provision to the shoe trade. If the only shoes made were size 10 all-weather boots, those wanting size five pink stilettos would be sadly disappointed. Most of us are not fit and able six-footers, so viewing slots need to be at variable heights; not everyone can walk a mile non-stop so we, just like the birds need a perch every 150 yards or so.

“I wanted nature to be more accessible. I wanted the designers to go back to the drawing board and make sure that the provisions they make for human access more friendly to all.”

Organised by Wildlife Tourism Australia and to be opened by NT Administrator the Honourable Sally Thomas AM, the October 2-4 workshop will examine the problems, potential and possibilities of connecting wildlife and visitors in the Top End. 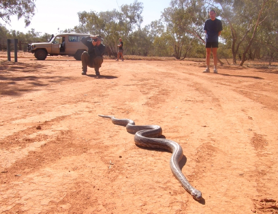 What do tourists value when they visit Australia’s Top End?  Are they into shock and awe?  In other words do they care as much as the tourism industry about what Australian region has the biggest crocodile?  And what about birdwatching?

Women dominate the huge US birdwatching market, and many want to experience more than just new birds. So are our guides too fixated on twitchers, a small market dominated by men?

If many visitors wish more a more in-depth experience, then does the tourism industry deliver?  Are the true experts involved, from the senior citizen who is an authority on native orchids to the grazier or Indigenous family living on their country.

If our wildlife tourism does not deliver to both citizens and visitors, then why not, and how can we fix it?

To examine the problems, potential and possibilities Wildlife Tourism Australia will hold a workshop on connecting wildlife and visitors in the Top End this coming October, to be opened by the Northern Territory Administrator, the Hon. Sally Thomas, AO.