Details
In UltraServe
/ Published on 11 September 2015

UltraServe won the award at the 2015 ARN ICT Industry Awards from a competitive field that included Kloud Solutions, Data#3 and HubOne.

The win topped off a year of record growth for UltraServe, which operates globally from its head office in Pyrmont and a development centre on the NSW Central Coast. During the past 12 months, UltraServe has undergone significant expansion throughout Asia, the Americas and the UK.

Jonathan Ross, who represented at the ceremony last night, said it was an honour to accept the award on behalf of the team at UltraServe. 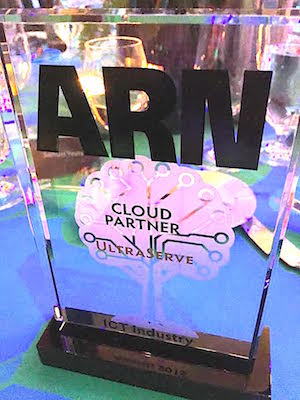 UltraServe VP of Sales Adam Chicktong said the success was a true team effort. “After such a busy year, it is fantastic recognition for the whole organisation,” he said.  “The incredible effort from our Platforms, Support, Engineering and Finance teams has enabled the business to execute on the strategies we laid out for the company 12 months ago.”

Much of UltraServe’s success is built on its SmartStack Platform-as-a-Service (PaaS) offering. SmartStack is a hybris-focused PaaS built on Amazon Web Services that gives customers the ability to: build entire production environments in less than 45 minutes; have seamless session persistence via blue/green deployments; completely immutable infrastructure and a 24x7 managed service wrapper that supports everything from the infrastructure through to the application.

UltraServe began its operations in 2000 and has developed to become a market leader in the Australian cloud & managed hosting services industry. In 2009, UltraServe was the first company to launch an Infrastructure as a Service (IaaS) cloud computing product in Australia – a true testament to its company vision of being industry innovators. UltraServe has continued to broaden its business model through key channel partner relationships such as Amazon Web Services and hybris, an SAP company, which will continue to shape the direction of the business moving forward. UltraServe is 100 per cent Australian-owned – creating and shaping the adoption of cloud technology in this country. Learn more at http://www.ultraserve.com.au.